Are You Your Own Worst Enemy?

Posted by Cheryl Mitchell on March 4, 2016 in Blog | Comments Off on Are You Your Own Worst Enemy? 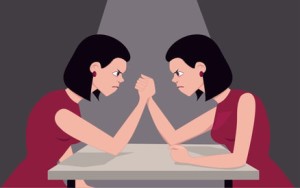 Have you ever found yourself fighting an internal battle about an upcoming important decision you need to make, or second guessing yourself and even throwing emotional grenades at yourself over a decision already made? Are you berating yourself because you made the “wrong” decision and keep kicking yourself while you’re down, so to speak? If so, have you noticed how that also negatively impacts your ability to make a confident decision the next time you need to? You may keep referring back to your screw up and keep yourself stuck with the continual reminder that you can’t do anything right.

This internal conflict, or emotional warfare we wage on ourselves, is something that everyone has or will experience at some point. The ammunition we use to inflict our wounds in this bitter struggle can range from internal abusive dialogue to undesirable behavior such as overspending or poor work performance to outright physically harming ourselves through sabotaging behavior like excessive drinking, taking drugs, or overeating. Sometimes we can even bring on a good cold or flu to punish ourselves, or even in extreme cases, manifest an illness. The most common result I have witnessed is an experience of immobility; a lack of moving forward or making a decision and sticking with it.

Yet, this common experience needn’t be an everyday occurrence. It can, at the very least, be managed. You can even learn how to avoid this emotional war zone altogether and experience an expanded awareness of peace of mind and a feeling of improved confidence in your decision making.

First off, remember that this internal conflict is part of the way our subconscious mind works. The subconscious holds beliefs that are diametrically opposed to one another, and whenever either belief is activated, it seems true while being experienced. This is why we experience the warring parts of ourselves where one part wants one thing and another part wants the opposite thing.
Understand that each part has a job to do and is doing the best it can to help you in some way. These parts of our personality can be very strong and effective in molding our behavior. They are often times created during our young childhood in an effort to keep us safe in some way, whether the threat was real or imagined, and that is why at times it can be difficult to change the long held belief. It has served us for a long time and it can be a little frightening to let it go.

So the idea is not to try and cut the part out of you, but rather to first be aware of it and then to see if you can figure out what purpose it may serve. This process is best served with awareness and non-judgement, so start by accepting that you are in conflict with yourself and be okay with that. You have conflicting wants or desires (or parts) and you are allowed to have those conflicts. It doesn’t make you bad or wrong. The thoughts are stemming from your emotions and there, too, you are allowed to feel how you feel. Your emotions exist because of the beliefs that you (a part of you) hold about each side of the argument, and again, it is okay for those beliefs to be in conflict with each other. You can work through all this and come to a place of peace.

Awareness is a first step and then willingness to allow yourself to investigate both sides and thoroughly uncover the motivations and beliefs from all angles. Think of it as entering into peace talks. Both sides think they are right and want to be fully listened to and understood. That alone can bring great insights to help negotiate the peace treaty with yourself and perpetuate a dialogue to begin to bring about a better understanding from each side about each side so that peace can reign once again.